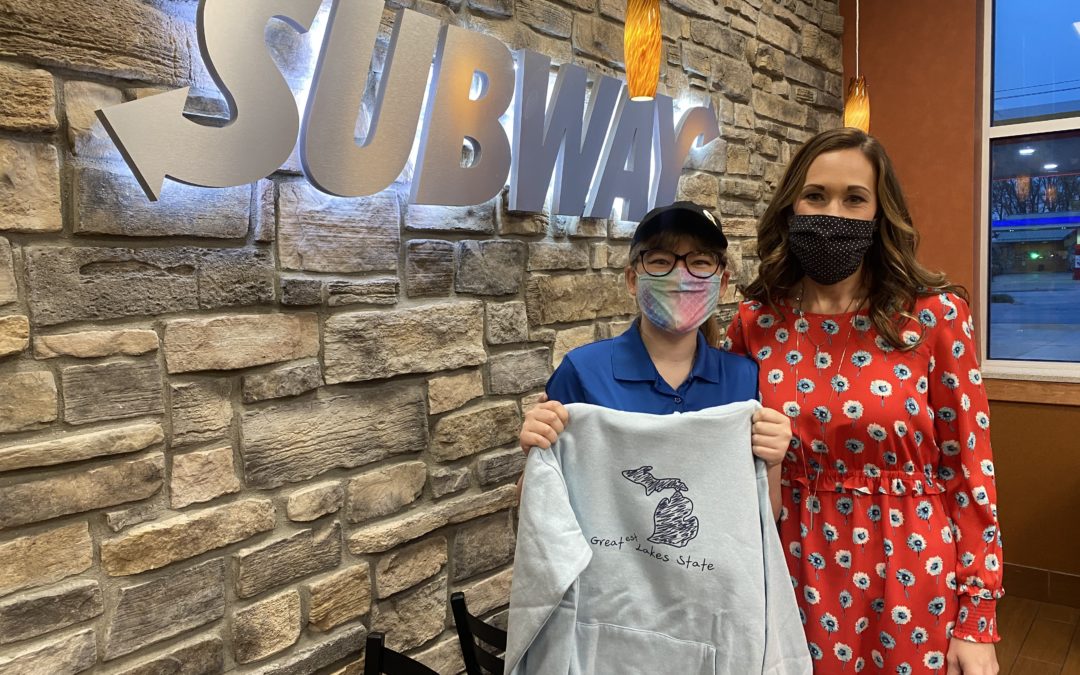 Subway restaurants put the term “Sandwich Artist” on the map, but one area aspiring cartoonist is bringing a whole new meaning to it.

Emaris Gonser, an employee at the Subway location on M-84 in Bay City, recently parlayed her drawing skills into a unique opportunity that took her from making sandwiches to designing sweatshirts.

And it all started with a competition.

Gonser’s Subway location, owned by Forward Corp. in Standish, participates in a suggestive selling contest amongst its 55 sister restaurants. To add a little fun to the mix, Gonser drew caricatures of her and her co-workers and put them at the counter to show who was on shift. Customers loved the creativity and enjoyed the extra entertainment the drawings provided.

But the drawings also caught the eye of Abby Moniz, president of Forward Corp. In addition to owning and operating Subway restaurants and convenience stores, Forward Corp. also owns T.R. McTaggart, a tourism-centered screen-printing and embroidery business. Moniz thought Gonser’s skills could translate to apparel, and so she connected her with T.R. McTaggart’s division manager. Within days a concept had been created and a sweatshirt was in the works.

“It was exciting,” Gonser said of the process. “Working at Subway is my first job, but I never thought I’d end up designing a sweatshirt because of it.”

Gonser’s design is a hand-drawn image of Michigan with the words “Great-est Lakes State” printed underneath. Simple and fun, it will be available for purchase at select Forward Convenience Stores, and will also be available for T.R. McTaggart customers across the state to order

“We love Emaris’ design and think customers will, too,” Moniz said. “We have many talented employees at Forward and it’s exciting that she could use her skills to build her portfolio while also giving T.R. McTaggart’s customers a great new design to consider.”

Gonser’s talents as an artist do extend to sandwich making, as well. In just under a year of working at Subway, she’s been mentioned by name in positive customer reviews and is praised by co-workers and managers alike. She hopes to attend art school one day with the goal of creating storyboards for TV animation.

Until then, she’s enjoying her time working at Subway and plans to continue updating her famous co-worker cartoons.

“I love working with the team and customers here,” she said. “Everyone is so nice and it’s just a really fun place to be.”

Co-worker cartoons drawn by Forward Corp. Subway employee Emaris Gonser are used to show who is working during any given shift.

Forward Corp. is a fifth generation family-owned and operated Michigan company that has been in business over 95 years. Known primarily for its 29 Shell and Marathon convenience stores, Forward’s brand portfolio has grown to include Subway restaurants, Super 8 Hotels, a Quality Inn, and The LumberJack Restaurant in West Branch. Forward Corp. also owns and operates Forward Energy, a home-heating business, and T.R. McTaggart, a custom screen print and embroidery business. Forward Corp. is headquartered in Standish, Mich., and proudly employs 1,000 Michigan residents across the state.